TEHRAN, Nov 3_A US federal judge has temporarily blocked a Trump administration policy that would have required prospective immigrants to obtain health insurance within 30 days of their arrival in the United States. 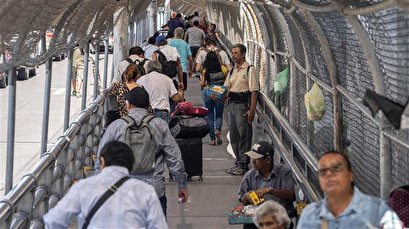 TEHRAN, Young Journalists Club(YJC)_Judge Michael Simon in US District Court in Portland, Oregon, on Saturday granted a 28-day temporary restraining order that stops the administration from implementing its rule, which was set to take effect on Sunday,  Nov. 3.

“Facing a likely risk of being separated from their family members and a delay in obtaining a visa to which family members would otherwise be entitled is irreparable harm,” Simon wrote.

Seven US citizens and an advocacy organization lodged a suit to block the rule, asserting it “rewrites our immigration and healthcare laws by Presidential fiat” and could badly impact hundreds of thousands of prospective immigrants.

“Today’s decision highlights the urgency of blocking this health care ban before it causes irreparable damage to our community and those we serve,” said Carmen Rubio, executive director of Latino Network, a plaintiff in the case.

“We know that our fight is far from over, we will be steadfast in our work to ensure that we end family separation, ensure the dignity and rights of our community are respected, and hold this administration accountable to our nation’s constitution.”

According to research from George Washington University, recent immigrants, who had no insurance, comprised less than a tenth of 1% of US medical fees in 2017.

Trump has made his hard-line stance on immigration an integral part of his presidency and has promised to build a wall along the US-Mexican border to curb the flow of migrants from Mexico and Central America.

His administration has been able to introduce policies that restrict asylum, tighten requirements for skilled-work visas and slash the number of refugees the country will accept.

Trump has also come under fire from Democratic lawmakers and civil rights activists who had paid visits to some detention centers along the southern border with Mexico, where migrants are locked up in overcrowded buildings and suffer from inadequate access to food, water and other basic commodities.