Tehran, YJC. Majlis speaker has called for the EU to attempt to boost relations with Iran. 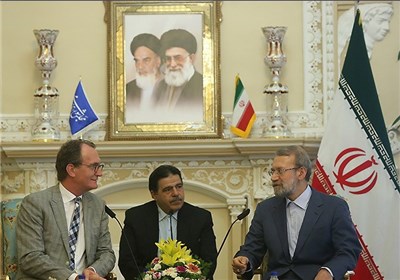 Speaking to his guest the Netherland Ambassador to Iran on Monday, Iran’s parliament Speaker Ali Larijani stated "There are huge economic and trade capacities in Iran. The EU is able to play a decisive role in improving political and economic relations between the union and the Islamic Republic of Iran.”

Johannes Duma in turn expressed hope over Iran’s nuclear talks with the Six Majors and said "The comprehensive agreement between the two sides can lift the hindrances that cripple trade and economic relations.”

The Netherlands Ambassador to Tehran stated that it would be necessary for the two countries’ parliaments to engage in mutual relations in order to help bring the two countries closer together and said "Parliamentary relations can contribute to the betterment of relationships between nations and increasing cultural ties.”