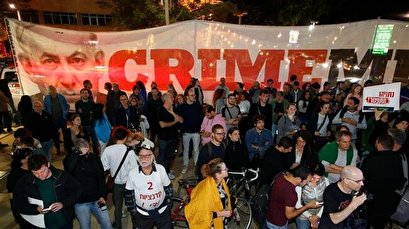 TEHRAN, Young Journalists Club(YJC)_At least 6,000 people were at the gathering in the Habima Square of Tel Aviv, Israel’s Channel 12 estimated.

Netanyahu is “the most cowardly prime minister we’ve ever had," a demonstrator told Yedioth Ahronoth (Ynet), adding that the premier "needs to resign and go plead his case in court."

Israel is "sick of the corruption", another protester said. "We need to send Bibi home," she said.

A same rally had been held last Saturday in Tel Aviv, where hundreds of demonstrators urged Netanyahu to leave office.

“What you see here is absurd. We have a man who is charged with three major crimes. And he still believes he wants to be [a] prime minister. I mean this is crazy,” a protester said.

Netanyahu’s political opponents and demonstrators have moved to capitalize on the indictment on charges relating to corruption, bribery and breach of trust against him, hoping to strip the weakened 70-year-old leader of power.