US consumer confidence falls on concerns over trade war with China

TEHRAN, Dec 1_The holiday shopping season just kicked off in the US with Black Friday, the busiest shopping day of the year. It's the first time it's come round since consumer goods from China were hit with tariffs. 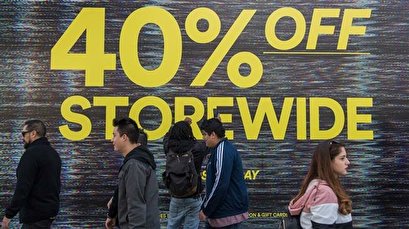 TEHRAN, Young Journalists Club(YJC)_Consumers are hitting the streets and their laptops at a good time for the US economy. Unemployment is near a 50-year-low and wages have risen, but US consumer confidence has been falling on concerns over the trade war with China.

Retail analyst Burt Flickinger says some retailers will be more impacted by the tariffs than others.

He says the smart ones like Walmart, Target and Costco worked with their partners in China to have eight to 10 months of inventory shipped ahead of the recent round of tariffs implemented in September.

"The retailers that did not invest working capital in inventory that are paying higher prices - Petco - is an example - are paying a painful price. Some of the department stores that did not take big positions are passing along the tariffs," said Flickinger.

Many electronics like wireless earbuds and TVs have already been hit with higher import prices as of September 1st when the US slapped a 15 percent tax on 112-billion dollars'-worth of Chinese goods.

Electronics are top on the list of many shoppers' lists.

According to the Consumer Technology Association, more than 80 percent of Americans shopping on Black Friday plan on buying tech. That's because this time of the year is one of the best to snag deals.

"I got a 10 percent discount on the Switch," said a consumer.