Yemeni fighters down another Saudi spy drone, this time over Hajjah

TEHRAN, Dec 1_A surveillance drone belonging to the Saudi-led military coalition has been shot down by Yemeni fighters while flying in the skies over the northwestern province of Hajjah. 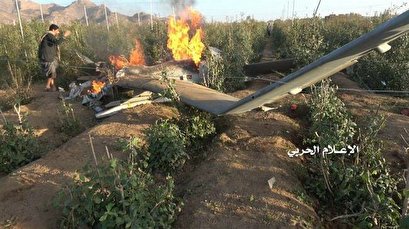 The statement added that the drone was struck over Hayran district.

The Yemeni army forces and allied fighters from the Popular Committees have managed to hit the enemy's aircraft almost regularly over the past months.

A similar drone was shot down in Bani Muadh area of the Sahar district in the northwestern province of Sa’ada on April 19.

And on Thursday, Ansarullah forces downed a Saudi Apache helicopter near the Yemeni border. The two pilots were killed.

The spokesman for the Yemeni Armed Forces, Brigadier General Yahya Saree, said the helicopter had engaged in "hostile activity."

In his statement, Saree warned against incursions into the Yemeni airspace.

The military official reiterated that Yemen was ready to go to great lengths to protect its airspace against any act of aggression.