TEHRAN, Dec 2_The world must choose hope over surrender in the fight against climate change, UN Secretary General Antonio Guterres says, warning a summit in Madrid that governments risked sleepwalking past a point of no return. 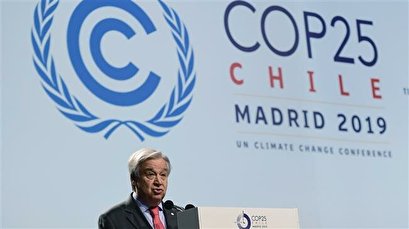 TEHRAN, Young Journalists Club(YJC)_Two weeks of talks aimed at bolstering the 2015 Paris Agreement to curb global warming began against a backdrop of unusually severe weather disasters this year, from fires in the Arctic, Amazon and Australia to intense tropical hurricanes.

Guterres, a former Portuguese prime minister and leading advocate of more ambitious action to reverse the upward march of greenhouse gas emissions, urged governments to avoid a "path of surrender" that would endanger the health and safety of all.

"Do we really want to be remembered as the generation that buried its head in the sand, that fiddled while the planet burned?" Guterres told an opening session at the summit, held in a hangar-like conference center.

He urged delegates to resolve an important outstanding issue from the Paris accord: rules on carbon trading, seen as vital for kick-starting faster action to reduce emissions.