TEHRAN, Dec 3_Iranian President Hassan Rouhani urges all neighboring states to stand shoulder to shoulder against foreign interference in regional affairs and work collectively to safeguard the region and its strategic waters. 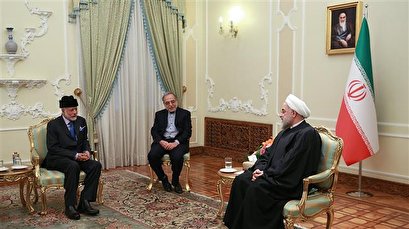 TEHRAN, Young Journalists Club(YJC)_Through the expansion of cooperation, we should establish security in the region, particularly in the Persian Gulf and the Strait of Hormuz, and should not allow foreigners to interfere,” Rouhani said in a meeting with visiting Omani Foreign Minister Yusuf bin Alawi in Tehran on Tuesday.

Rouhani was referring to the plan he introduced to the world leaders in September at the 74th session of the UN General Assembly, where he took the podium to invite all countries affected by tensions in the Persian Gulf region to join a coalition meant to enhance friendship and promote “peace, stability, progress and welfare” for regional nations.

The Iranian president further added that Iran sees no problem in expanding ties with its neighbors and resuming diplomatic relations with Saudi Arabia, saying all countries should stand together in order to ensure security and stability in the region.