Nationwide strike to paralyze France in Macron showdown with unions

TEHRAN, Dec 5_France is set to be paralyzed on Thursday by a nationwide strike by transport workers, teachers, and other professionals in a showdown between unions and President Emmanuel Macron over his planned pension reforms. 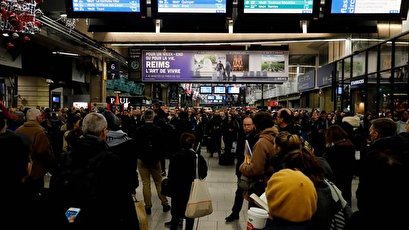 TEHRAN, Young Journalists Club(YJC)_Some 90 percent of high-speed trains have been axed, most of the Paris metro will be shut, hundreds of flights canceled, and the majority of schools closed in the strike.

With some air traffic controllers also walking out, flag-carrier Air France said it was axing 30 percent of its internal flights and 15 percent of short-haul international routes.

The strike — which is open-ended and could last several days — has drawn comparisons with the struggle between government and unions in November-December 1995, when the country was paralyzed for around three weeks.

Workers across France will have to stay at home or find novel ways to access their offices using car-sharing services, rental bikes, or e-scooters.

The strikes will be a major test of whether Macron, who came to power on the back of a promise to transform France and has also sought a prominent place on the international stage, has the political strength to push through his vision.

The president is seen as having seen off the threat posed by the "yellow vest" protesters whose weekly demonstrations against inequality shook France from November last year.

But their anger could feed into the strike movement called by the unions and a transport strike on September 13 that caused gridlock in Paris might prove a harbinger of things to come.