Pompeo had secret meeting with GOP donors in London: Report

TEHRAN, Dec 6_US Secretary of State Mike Pompeo secretly met with a conservative group, including a few wealthy Republican donors, in London, according to a report. 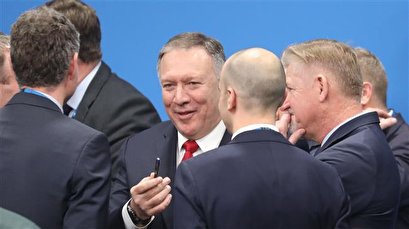 TEHRAN, Young Journalists Club(YJC)_The meeting was not on Pompeo’s official schedule, CNN reported Thursday based on a copy of an invitation to the gathering it obtained as well as interviews with people who attended it.

The meeting, which was hosted by the Hamilton Society, took place at the hotel where Pompeo was staying while he and President Donald Trump were there for a NATO summit this week.

The news network also reported that the people attending the meeting were prevented from taking their phones inside the venue so that Pompeo's comments would not be recorded.

"Everyone is right of center, so it was a safe space," one person told CNN, noting that the top US diplomat was "very chatty, casual, and entertaining."This comes amid speculation that Pompeo could run for Senate in his home state of Kansas. Trump has recently said that Pompeo would do so if the Republican party were to lose.

"He came to me and said, 'Look, I would rather stay where I am,' but he loves Kansas. He loves the people of Kansas. If he thought that there was a chance of losing that seat, I think he would do that, and he would win in a landslide," the Republican president said late last month.

Pompeo’s initial plan had been to stay in office at the State Department until early spring next year, according to a report.