TEHRAN, Dec 6_Families of those killed by Israeli forces aboard an aid flotilla heading for the besieged Gaza Strip in 2010 will appeal the International Criminal Court (ICC)’s decision not to press charges against Tel Aviv. 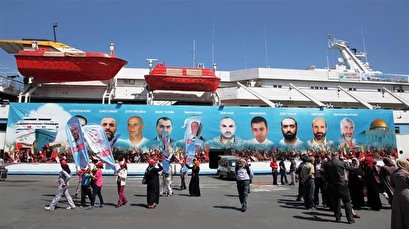 TEHRAN, Young Journalists Club(YJC)_Their lawyers announced the news on Thursday, three days after ICC’s Chief Prosecutor Fatou Bensouda said there was “no reasonable basis to proceed with an investigation.”

In a statement, lawyers said that the decision showed that the “intent is to safeguard Israel -- so blatantly and flagrantly right under the international community's nose -- against any indictments of war crimes.”

Bensouda’s decision was made three months after the tribunal’s judges in The Hague ordered her for a second time to reconsider her earlier refusals and to launch an investigation into the case.

On May 31, 2010, Israeli naval commandos, from speedboats and helicopters, attacked the Gaza Freedom Flotilla comprising six civilian ships in international waters in the Mediterranean Sea, killing nine Turkish citizens, including a teenager with dual Turkish-US citizenship, on board the Turkish-flagged Mavi Marmara.

A 10th Turkish national later succumbed to his injuries in a hospital in 2014. The Israeli attack also wounded some 50 other people on board the ship.

The flotilla was trying to reach the Gaza Strip and deliver desperately-needed humanitarian aid to the inhabitants of the blockaded sliver.