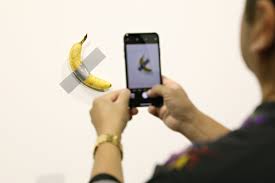 TEHRAN, Young Journalists Club(YJC)_David Datuna strode up to the controversial artwork, took it off the wall, peeled its outer layers and proceeded to eat it.

His actions were filmed by a crowd of onlookers before he was escorted away by Perrotin New York Director Peggy Leboeuf.

The piece - called 'The Comedian' - was created by Maurizio Cattelan, an Italian artist best known for creating 'America', an 18-carat-gold toilet.

That was stolen from the UK's Blenheim Palace over the summer. The banana has sparked debate about commercialization of objects in the art world.