Trump declares self 'greatest of all presidents’

TEHRAN, Dec 8_US President Donald Trump has called himself the "greatest of all presidents” as Democrats are meeting this weekend to prepare impeachment charges against him. 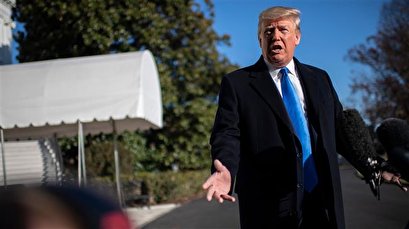 The report covers the "constitutional grounds for presidential impeachment," including bribery, abuse of power, betrayal of America’s national interest and corruption.

Trump, who has dismissed all the allegations ever since the impeachment inquiry was launched, took to Twitter Saturday afternoon, saying the American voters do not want him to be impeached.

“Not only have the Democrats not advanced key pieces of legislation that would help the economy, but the polls, especially in early states, are showing that voters are tuning out.” @PeteHegseth They don’t want our greatest of all presidents impeached!

Trump also said that Democrats’ “case” against him is not strong because they have been shifting from the alleged Russian interference in the 2016 US election to Ukraine and now back to Russia.

“Why re-elect Democrats when you know that this is what they are doing with their majority. Their case is not strong because first it was Russian Collusion, then it was obstruction, then it was Ukraine, now their pivoting back to Russia. Why would they be doing that?” Lisa Booth

On Friday, the White House told Chairman of the Judiciary Committee Jerrold Nadler it would not participate in the hearings and called the impeachment inquiry "completely baseless" and said that House Speaker Nancy Pelosi had ordered Democrats to draft articles of impeachment "before your committee has heard a single shred of evidence."

"House Democrats have wasted enough of America's time with this charade," White House counsel Pat Cipollone's letter to Nadler said. "You should end this inquiry now and not waste even more time with additional hearings."