TEHRAN, Dec 12_Last Tuesday, December 3, the French parliament adopted a resolution which it claims helps protect Jews from anti-Semitism, but instead adopted a piece of legislation which delegitimizes Palestinian voices and has implemented a categorically racist law against them. 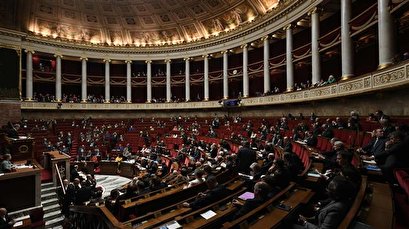 TEHRAN, Young Journalists Club(YJC)_The “Motion for a resolution to fight anti-Semitism” was tabled by Paris Lawmaker Sylvain Maillard and was passed through parliament with 152 votes for and 74 against. The resolution itself was based upon the International Holocaust Remembrance Alliance (IHRA) definition of anti-Semitism, which equates criticism of Israel and also certain conspiracy theories with hatred of Jewish people.

The resolution, despite claiming to oppose one type of bigotry, has in fact legalized another type of bigotry. Instead of protecting Jewish people, this resolution passed in France makes it hate speech for Palestinians to criticize the regime which has ethnically cleansed them and is currently killing them and operating an apartheid system against them.

The overwhelming majority of Palestinians living inside of France are evidently opposed to the policies of Israel. To delegitimize their ability to free speech on the foreign regime which kicked them out of their homeland is nothing more than a racist double standard. The irony in this is that it is not only killing freedom of speech, whilst supposedly protecting one minority group from demonization, but it actually demonizes an entire community of people just because of where they come from and what they believe in, which is inherent to their identity.

There are no such bills which would make it hate speech to criticize Palestinian political institutions and the actions taken by these given groups; in fact, such proposals themselves would likely cause a mainstream media uproar followed by accusations of anti-Semitism. And rightfully, there would be an outcry, and the mood from French Jews would be, that they were targeted, if such a piece of legislation was to be introduced. So why are the concerns of French Palestinians not taken into account like this?