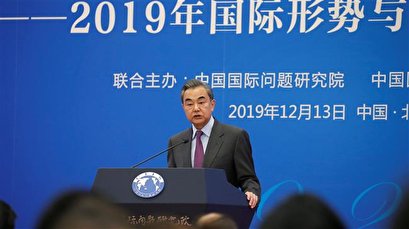 TEHRAN, Young Journalists Club(YJC)_Foreign Minister Wang Yi accused Washington of having “seriously diplomatic the foundation of hard-earned trust between China and the US.”

“We are willing to resolve the contradictions and differences with the US through dialogues and discussions based on equality and mutual respect, but we will never accept any unilateral sanction or bullying,” he said.

Speaking at a symposium on international affairs in Beijing, Wang said the administration US President Donald Trump has "deliberately attacked and discredited China on issues of national sovereignty and dignity.”

Washington has recently introduced several pieces of legislation that could potentially target top Chinese officials with sanctions over what it alleges as human rights abuses in Hong Kong and China’s western Xinjiang Province.

China strongly denounced the legislation, calling the move as serious interference in its internal affairs.

Earlier this month, the US House of Representatives passed a bill, which allows Trump to impose sanctions on Chinese government officials responsible for the alleged repression of Uighurs, a minority Muslim community that lives in Xinjiang.

China rejects claims of mistreating Uighurs, saying it has been taking anti-terrorism measures against separatists in the region who are seeking to join Takfiri outfits such as al-Qaeda.

Chin also accuses the US of interfering in issues related to months of violent anti-government protests in Hong Kong. It says the US and Britain have been fanning the flames of the unrest in Hong Kong by supporting rioters.

Wang reiterated on Friday that Beijing will “resolutely fight against external forces that interfere in Hong Kong’s affairs” and “sever the black hands” supporting the protests in the Chinese territory.