Macron’s ‘Uberization’ pension model: odd-jobbing can’t provide a salary, how can it provide a pension?

TEHRAN, Dec 13_Macron wants to turn France into the US, but the French prefer Asia’s moral governance 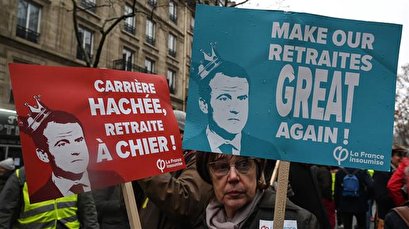 HRAN, Young Journalists Club(YJC)_We designed this system for the younger generations, those who will have to face professional mobility, geographical mobility and herky-jerky careers.”

-    French Prime Minister Edouard Philippe at the unveiling of what aims to be the world’s first one-size-fits-all pension system, 11 December 2019

“Like poor farmers all over China, they always had to look for supplementary employment, and their odd-jobbing during busy seasons was at the cost of their own crops. The 1942 survey team gave the example of a Suide county village in which 31 percent of all poor farmers hired themselves out at one time or another to other farmers each year, and another 31 percent hired out full time.”

- From the book Late Victorian Holocausts, by Mike Davis, describing the situation of pre-revolutionary China

Macron and the globalist 1% would be thrilled if they could achieve such astronomical part-time figures.

France would not be more than a week into a huge general strike if their “uppity” workers were reduced to begging for part-time work - like in the Anglo-Saxon world - instead of mostly working on long-term contracts.

The “Uberization” of the work force is an atrocious Western concoction, but it’s not historically new. However, making your pension based on a lifetime of odd-jobbing is definitely unprecedented.

The enormous difference between France and pre-revolutionary China is that nobody is occupying France militarily, controlling their foreign trade, making their leaders puppets who cannot properly administer a country, and nor is anyone forcing in tons of drugs (the infamous “Opium Wars”). France is Uberizing (or Americanizing) their economy from the cradle to the grave amid record corporate profits and zero foreign sanctions.

Odd-jobbing as a way of life only worked temporarily in China - a popular revolution was able to restore sovereignty in 1949, and now China is the economic envy of the world - but that’s not the case for many Western nations, sadly.

Macron wants to turn France into the US, but the French prefer Asia’s moral governance

Is France China? No, France is more like the US. A tough assessment, but it certainly will be even truer if their general strike fails to stop Macron’s radical pension “reform”.

Quite simply: All workers cannot be united… under a single pension system, that is. Somebody starting work at 18 and working in the cold and heat cannot be compared with a PhD graduate, who didn’t start his or her cushy office job until 30. So, only the dense and naive still push this idea.

But the dense and naive are actually running France’s semi-dictatorial executive branch and its totally aristocratic/bourgeois legislative branch!

There is much to write about France’s radical (in a reactionary, not a leftist/progressive sense) pension system, unveiled yesterday, but what we should not do is believe that it is actually new.

Return to those two quotes, but put aside the modern Western propaganda fomenting prejudice against rural people, and their identity politics-inspired idea that all workers are not fundamentally similar - the Uber model of work is the same as perpetual, precarious, pension-less “odd-jobbing”. What pre-progressive China had was an “Uberized” economy and… it was terrible.