IRGC chief warns US, UK, Israel to stop sedition or see their interests set on fire

TEHRAN, Dec 13_Chief commander of the Islamic Revolution Guards Corps (IRGC) says the US, UK, Israel, and the regional regimes must expect to see their interests on fire if they continue stirring sedition in the Islamic Republic. 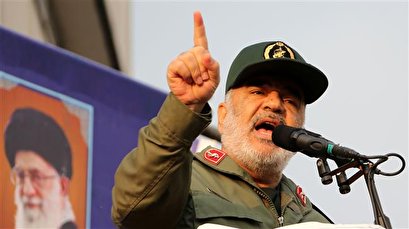 TEHRAN, Young Journalists Club(YJC)_I tell you – the leaders of America, Israel, Britain, and the regional enemies who instigate sedition – if you don't stop sedition, we will set fire on your interests, and this is our last word,” Major General Hossein Salami told a gathering in Rey, south of Tehran.

“We tell our enemies: we will chase you, find you, and take revenge on you,” he warned.

General Salami had earlier said that the enemies were attempting to incite “sedition” in Iran with the goal of “making up for their successive defeats against the Iranian people.”

In remarks on December 4, he said the enemies sought to portray the chaos in Iran as an outcome of “psychological pressure” on Iranians caused by Washington’s so-called maximum pressure campaign.

The Iranian people, however, managed to once again turn the enemy threat into an opportunity as they “were well aware that Iran faces a security risk whenever the enemies infiltrate into the country from abroad.”