TEHRAN, Dec 14_A US House committee has voted on charges against President Donald Trump, setting up the impeachment by the full House of Representatives next week where the Democrats hold a majority. 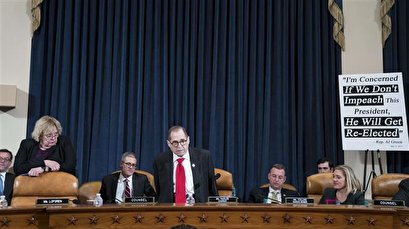 TEHRAN, Young Journalists Club(YJC)_The House of Representatives Judiciary Committee approved charges of abuse of power and obstruction against the Republican president on Friday, making it almost certain Trump will become the third US president in history to be impeached, Reuters reported.

The committee voted along party lines to approve an article of impeachment charging the president with abusing the power of his office when he pressured Ukraine to probe apossible 2020 Democratic presidential  rival, Democrat Joe Biden.

The panel also approved another article charging Trump with obstructing the US Congress' investigation of the scandal.

The committee had been expected to cast its impeachment vote Thursday night, but the panel's Democratic chairman delayed the proceedings until 10 a.m. ET (1500 GMT) Friday.