White House to announce withdrawal of 4,000 troops from Afghanistan: Report

TEHRAN, Dec 15_ The US government is reportedly planning to announce withdrawal of over 4,000 troops from Afghanistan as early as next week. 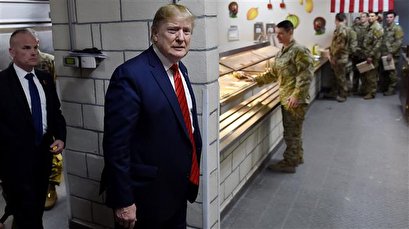 TEHRAN, Young Journalists Club(YJC)_Between 8,000 and 9,000 American troops will be left in Afghanistan after the withdrawal, NBC News reported Sunday, citing US officials.

The report was published after US Special Representative for Afghanistan Reconciliation Zalmay Khalilzad rejoined diplomatic talks with the Taliban on Thursday.

It s not clear when the withdrawal will start but the process is expected to take a few months.

However, according to a statement by a spokesman for US Forces-Afghanistan, “US Forces-Afghanistan has not received orders to reduce troop levels in Afghanistan. We remain fully committed to the Resolute Support mission and our Afghan partners, and focused on our key objective: ensuring Afghanistan is never again used as a safe haven for terrorists who threaten the United States, our allies or our interests.”