TEHRAN, Dec 15_ Police have fired tear gas canisters and rubber bullets to disperse hundreds of people gathering in the Lebanese capital Beirut to protest against government inability to amend a deteriorating economic situation in the country. 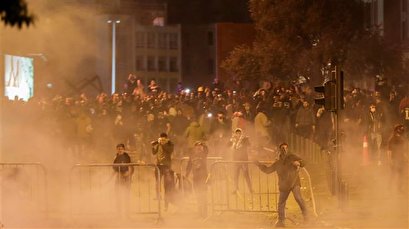 TEHRAN, Young Journalists Club(YJC)_The Lebanese Red Cross said on Saturday that 14 protesters had been injured during demonstrations that had erupted in a barricaded central district of Beirut.

It said six of those injured had to be hospitalized. State news agency NNA said people had fainted after police used tear gas against the protesters.

The clashes are the latest to come from a wave of protests against corruption and economic woes in Lebanon that began in late October and forced prime minister Sa’ad al-Hariri to resign.

The protests began after Hariri’s government decided to implement new tax plans at a time of increasing economic hardship for the Lebanese.

Devaluation of Lebanon's national currency has lowered confidence in the country's banking system as foreign donors refuse to help unless there is a government determined to enact long-anticipated economic reforms.

The protesters gathering in central Beirut on Saturday night were specifically angry at the lack of consensus among major political parties to form a new government that could address the economic problems in the country.

Police used rubber bullets and tear gas after a number of protesters tried to break into steel barriers blocking paths to the parliament and government headquarters.