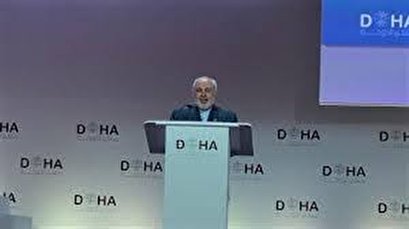 TEHRAN, Young Journalists Club(YJC)_Zarif made the remarks while addressing the Doha Forum in the Qatari capital on Sunday, where he said, “The disparities in power, geographic size, natural and human resources and the like among countries in our region have led to disastrous conclusions.”

“Some global actors look at these disparities and the unending rivalries in the region as an opportunity: indeed, as providing a fertile ground to expand their military presence and to sell more weapons to nearly all sides in the region,” Iran's foreign minister said.

He added that the presence of foreign forces in the region has failed to foster security and “only led to disasters, from the downing of an Iranian civil airliner by USS Vincennes in 1988 to the rise in extremism as a natural consequence of the US presence in Iraq and Afghanistan—an outcome we had predicted as early as 2001.”

Slamming Washington’s policy of selling more arms to the Persian Gulf countries, which has led to an arms race in the region, Iran's top diplomat said, “As for weapons trade, the Persian Gulf states accounted for nearly one quarter of global arms imports during 2014-18, almost doubling on average compared to the preceding five years. Unsurprisingly, the United States sold most of these lethal arms.”