Erdogan threatens to shut US Incirlik airbase in response to US sanctions, Armenian 'genocide' bill

TEHRAN, Dec 16_Turkish President Recep Tayyip Erdogan has threatened to shut down the major US Incirlik airbase in response to Washington's recognition of the Armenian "genocide" and possible introduction of new sanctions against the country. 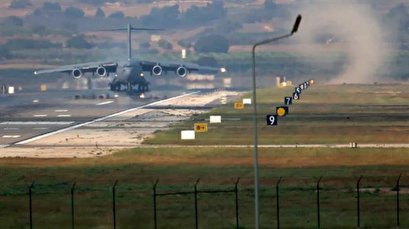 TEHRAN, Young Journalists Club(YJC)_"If it is necessary for us to take such a step, of course we have the authority...If this is necessary, together with our delegations, we will close down Incirlik if necessary," Erdogan said on A Haber TV on Sunday.

The Turkish president also suggested that Turkey can also close down the Kurecik radar base if necessary.

"If they are threatening us with the implementation of these sanctions, of course we will be retaliating," he added.

The US-operated Incirlik airbase, situated south of Turkey, is known to be used by Washington to stockpile nuclear weapons. A powerful early-warning radar is also stationed in the southeastern Kurecik base.

The president's remarks come a few days after Turkish Foreign Minister Mevlut Cavisoglu also warned that Ankara may close the Incirlik base if the US imposes sanctions on the country.