TEHRAN, Dec 16_More than 100 activists protesting against a new Indian citizenship law were injured in New Delhi on Sunday as they clashed with police who used tear gas and baton charges to disperse demonstrators at a major university. 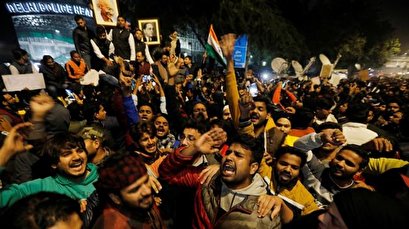 TEHRAN, Young Journalists Club(YJC)_Prime Minister Narendra Modi’s government says the new law will save religious minorities such as Hindus and Christians from persecution in neighboring Bangladesh, Pakistan and Afghanistan by offering them a path to Indian citizenship. But critics say the law, which does not make the same provision for Muslims, weakens India’s secular foundations.

Sunday was the fifth straight day of protests across the country against the law enacted earlier this month, and the third day running in the capital.

Police tried to contain thousands of protesters, including locals and students, who had gathered near the Jamia Millia Islamia University in southeast Delhi. Clashes erupted and authorities said protesters torched buses, cars and motorbikes.

Officials at two local hospitals said more than 100 people with injuries had been brought in following the clashes.

“Many of them have fracture injuries. We are running out of plaster of paris for casts,” said Inamul Hassan, an official at the Alshifa Hospital located near the university, adding more than 80 people with injuries had been brought to the hospital.