TEHRAN, Dec 16_Fresh violence has broken out in Hong Kong as the Chinese territory’s leader visits the mainland for talks with Beijing’s officials on the situation in the financial hub. 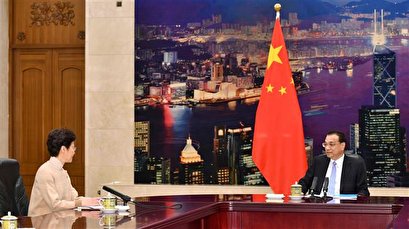 HRAN, Young Journalists Club(YJC)_Hong Kong Chief Executive Carrie Lam left the city for Beijing on Saturday for a four-day visit to discuss the political and economic situation in the city, which has been rocked by turbulent protests since June.

During a regular duty visit on Monday, Lam met with Prime Minister Li Keqiang, who called for the necessity of stopping chaos and violence in Hong Kong, which according to him is not yet out of its “dilemma.”

Li said that Lam’s government “must continue its efforts, end violence and stop the chaos in accordance with the law and restore order.”

Lam is expected to meet President Xi Jinping later in the day.

The two had formerly met in Shanghai in early November when the president said he had “high trust” in Lam.

Prior to her visit to Beijing, Lam said that the purpose of her visit is to provide Beijing with “a full account of what has happened in Hong Kong over the past year.”