TEHRAN, Dec 18_Iranian President Hassan Rouhani has underlined the need for cooperation among Muslim countries to fend off pressures by big powers, particularly the US. 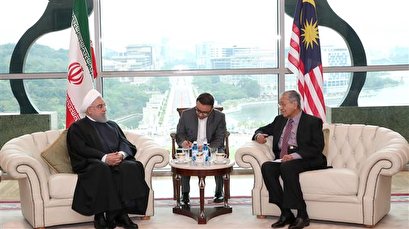 TEHRAN, Young Journalists Club(YJC)_It is necessary for Muslim countries to cooperate in order to counter pressures by big powers, Rouhani said on Wednesday during a meeting with Malaysian Prime Minister Mahathir bin Mohamad in Kuala Lumpur.

“Many problems facing Muslims are due to the interference of the US, including the sanctions against Iran,” he added.

Rouhani, who is in Malaysia to attend the Kuala Lumpur Summit, criticized the US for imposing “unilateral and cruel sanctions” on Iran, saying Washington left the 2015 nuclear deal between the Islamic Republic and major world powers without any justification and placed bans against Tehran despite UN Security Council Resolution 2231, which endorses the nuclear agreement, known as the Joint Comprehensive Plan of Action (JCPOA).

Stressing that sanctions will fail to dent Iran’s determination to boost ties with other countries, Rouhani underlined the need for Tehran and Kuala Lumpur to shore up ties in different sectors, including science, technology, energy, industry, tourism, information technology and medicine.

He expressed hope that the Kuala Lumpur Summit, which brings together leaders of Indonesia, Pakistan, Turkey, and Qatar as well as 450 Muslim intellectuals from around the world, would come up with solutions to challengers facing Muslim countries, particularly Middle Eastern states.

The Malaysian prime minister, for his part, called for expansion of ties with Iran in all sectors, expressing his country’s strong determination to increase trade ties with Tehran.

He said that sanctions have affected trade ties between the two countries but said his country was thriving to re-boost trade cooperation with Iran.