TEHRAN, Dec 19_Iran’s top security official has rejected US claims that it is providing weapons to the Taliban in order to fight the US influence in Afghanistan. 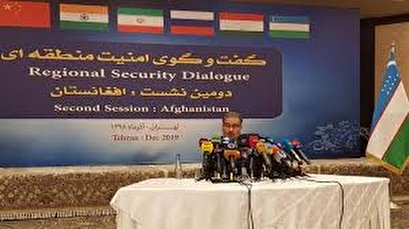 TEHRAN, Young Journalists Club(YJC)_ Wherever Iran has offered military assistance, it has not denied it. Iran has rendered advisory assistance to Iraq, Syria and Yemen. Iran need not provide weapons in Afghanistan. Any weapons … can be provided in abundance,” Secretary of Iran's Supreme National Security Council Ali Shamkhani said while speaking at a presser at the end of the second edition of the Regional Security Dialogue in Tehran on Wednesday.

“Such an allegation does not concur with Iran’s policy to help the government and peace and stability in Afghanistan,” he added.

Shamkhani’s remarks came as a Pentagon report claimed last month that Iran was providing weapons, money and training to the Taliban in order to fight the US influence in Afghanistan.

Elsewhere in his remarks, Shamkhani said that Iran opposed the US-Taliban talks, noting that “any strategy, any decision without the participation of the Afghan government is wrong and doomed to failure.”

Shamkhani noted that Tehran did not trust the US-led negotiations due to having once cooperated with Washington on Afghanistan but having been "put in the Axis of Evil" despite Tehran’s “praiseworthy, positive and benevolent measures.”

“We stressed during today’s meeting that the Afghan people and government should serve as the basis for any decision [on the country] and solutions should lead to problems and … insecurity,” he said.