TEHRAN, Dec 20_Iran's ambassador to the United Nations has severely censured the United States’ sanctions against ordinary people as well as different sectors of the Iranian economy, including oil and banking, arguing that the measures are negatively affecting the daily lives of millions of Iranians. 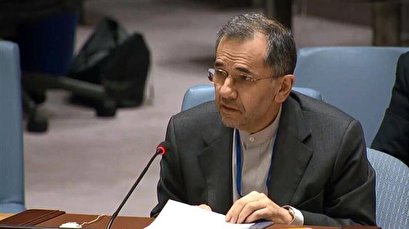 TEHRAN, Young Journalists Club(YJC)_Speaking at a United Nations General Assembly meeting in New York on nuclear non-proliferation and implementation of Resolution 2231, which backed the 2015 Iran nuclear deal – officially known as the Joint Comprehensive Plan of Action, Majid Takht-Ravanchi stated that the US sanctions "are neither short of war nor better than or an alternative to war," and that they are actually tantamount to war "but by other means and names."

He further noted that Washington has extended its sanctions against Iranians through weaponizing food and medicine, and in total disregard of the International Court of Justice (ICJ) ruling on October 3, 2018.

The United Nations' highest court ordered the US at the time "to lift sanctions linked to humanitarian goods and civil aviation imposed against Iran."