TEHRAN, Dec 20_Fresh clashes between Indian police and demonstrators erupted on Friday after more than a week of deadly unrest triggered by a citizenship law seen as anti-Muslim. 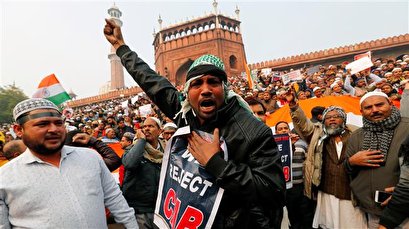 TEHRAN, Young Journalists Club(YJC)_Three protesters were shot dead on Thursday, taking the death toll to nine in the wave of anger that is emerging as a major challenge to Prime Minister Narendra Modi.

The law making it easier for persecuted minorities from three neighboring countries to get citizenship but not if they are Muslims, has stoked fears that Modi wants to remold India as a Hindu nation, which he denies.

Fresh clashes erupted in northern Lucknow Friday when police halted a few hundred people on their way to a planned protest, with security forces firing tear gas and charging with batons, an AFP reporter at the scene said.

In Delhi, a tense situation developed as an AFP reporter estimated thousands of people -- some carrying a huge Indian national flag -- rallied inside India's biggest mosque Jama Masjid and chanted freedom, as riot police looked on.

The protesters, joined by the leader of a prominent group in the Dalit community -- the lowest group in the Hindu caste system -- pushed their way out of the mosque onto the main road and tore down posters of Modi before sitting down on the road at Delhi Gate in the Old Delhi district.