US evangelical Christian magazine says Trump should be removed from office

TEHRAN, Dec 20_A leading US evangelical Christian publication said Thursday that President Donald Trump is "morally lost and confused" and should be removed from office, one day after the US House of Representative voted to impeach Trump. 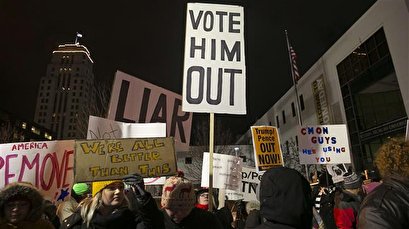 TEHRAN, Young Journalists Club(YJC)_Christianity Today, founded in 1956 by the late Reverend Billy Graham, wrote in an editorial carrying the headline “Trump Should Be Removed from Office” that it could no longer stand on the sidelines following Trump’s impeachment.

“The president of the United States attempted to use his political power to coerce a foreign leader to harass and discredit one of the president’s political opponents,” the editorial read.

“That is not only a violation of the Constitution; more importantly, it is profoundly immoral,” it said.

The magazine’s editorial, written by editor-in-chief Mark Galli, raised fresh doubts about the durability of Trump’s support among conservative Christians, who are among his most loyal voter base.

The Graham family is no longer associated with the publication. Franklin Graham, Billy Graham's son, is also an influential Christian evangelical leader and a staunch Trump supporter.

The scathing article came one day after the Democratic-controlled House of Representatives made Trump the third president in US history to be impeached on charges of abuse of power and obstructing Congress.

In making its case, Christianity Today referred to the same stance it took on the impeachment of former President Bill Clinton, when it called for his removal.

“Unfortunately, the words that we applied to Mr. Clinton 20 years ago apply almost perfectly to our current president,” the editorial said.