Woman dies in Welsh hospital after six-hour wait for ambulance

TEHRAN, Dec 22_A 47-year-old woman died after falling outside her home and waiting for several hours on a cold pavement for an ambulance. 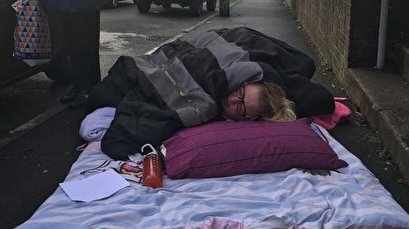 TEHRAN, Young Journalists Club(YJC)_Donna Gilby was unable to move after breaking her foot in the fall on a residential street in the village of Cwmaman in south Wales.

Gilby’s family claim she was there for almost six hours until an ambulance arrived, during which time neighbors and relatives covered her with coats and blankets to try to keep her warm.

She was eventually collected and taken to hospital, where she later died of cardiac arrest.

The Welsh ambulance service accepted that the response took longer than it would have liked and it has launched an investigation. It said an increase in the number of high-priority “red” calls and significant hospital handover delays were affecting its response times.

Gilby’s father, Gareth Gilby, 74, said she tripped as she was getting out of her car. “There was nothing we could do because she had a bad break and we couldn’t physically move her from the pavement,” he said. “We kept ringing the ambulance and she was in and out of consciousness but they still didn’t show up for hours.”

He added: “I still can’t believe she’s gone. I’m in shock. We’ve got an 11-year-old girl here now without a mother. It shouldn’t have happened.”

Gilby was on her way to a doctor’s appointment when her family say she fell shortly before 8 a.m. on Tuesday. “We then called the ambulance service and told them Donna was slipping in and out of consciousness – that must have been somewhere between 8 a.m. and 8.30 a.m.,” her father said.