Trump: ‘Pelosi gives us the most unfair trial in the history of the US Congress’

TEHRAN, Dec 23_US President Donald Trump has accused House Speaker Nancy Pelosi of “breaking all the rules” by holding on to the articles of impeachment instead of sending them to the Senate, saying that she has conducted “the most unfair trial in the history” of the United States Congress. 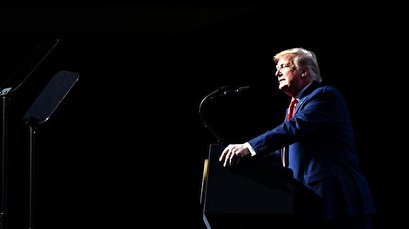 TEHRAN, Young Journalists Club(YJC)_“Pelosi gives us the most unfair trial in the history of the U.S. Congress, and now she is crying for fairness in the Senate, and breaking all rules while doing so. She lost Congress once, she will do it again!” Trump tweeted on Monday.

Meanwhile, Pelosi hit back at Trump over his criticisms of the House impeachment process.

“The House cannot choose our impeachment managers until we know what sort of trial the Senate will conduct,” she tweeted. “President Trump blocked his own witnesses and documents from the House, and from the American people, on phony complaints about the House process. What is his excuse now?”

Two days before speaking in Florida, Trump also blasted Pelosi for delaying sending the articles of impeachment to the Senate and claimed that Democrats had “no case” to impeach him.

Trump described Pelosi as "crazy Nancy," and said the House Democrats were pursuing an “illegal unconstitutional, and hyper-partisan impeachment.”