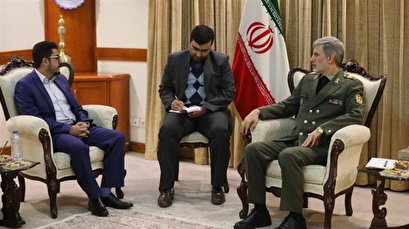 TEHRAN, Young Journalists Club(YJC)_Brigadier General Amir Hatami made the remarks in a meeting with the new Yemeni ambassador to Tehran, Ibrahim Mohammad al-Dailami, on Monday.

“These achievements have astonished the world and in fact Yemenis have gone the way that the Islamic Republic of Iran's Armed Forces paved during the eight years of the Sacred Defense,” the minister added, referring to the progress the Yemeni Armed Forces have made in relying on domestic experts in the field of weapons technology.

“Today, Yemen has reached a level of military capability that can penetrate deep into the enemy's front, target enemy strongholds from a distance of more than 1000 kilometers, create deterrence, and disrupt military-political security equations in the region,” Hatami further said.

The Iranian minister also emphasized that the Yemeni crisis would be resolved through consultation and dialogue between all political parties in the country, stressing that the issue has no military solution.

“Yemen belongs to all Yemenis, and the Yemeni-Yemeni dialogue in a peaceful atmosphere with the participation of all parties, groups and political-social currents is the only practical solution to the complicated problems in this country,” Hatami said.