TEHRAN, Dec 24_US 2020 presidential, House Representative Tulsi Gabbard has been urged to resign from her post in the wake of defying the Democratic Party and voting “Present” in the impeachment of President Donald Trump. 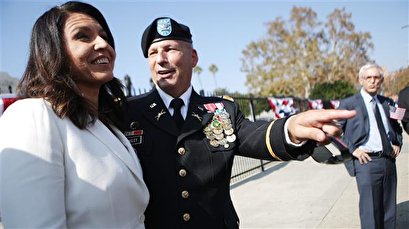 TEHRAN, Young Journalists Club(YJC)_A former Democratic governor of Hawaii called on the presidential hopeful on Monday to immediately resign from her seat in the lower chamber of US Congress.

Neil Abercrombie, who led the state from 2010 to 2014, personally phoned Gabbard for that purpose.

“I’ve left a detailed message for her as to what I was thinking, what I was doing and what I hoped she would do,” Abercrombie told Politico in a phone interview following his announcement. “I’m sure she pays attention to her voicemail.”

Abercrombie is a former longtime House member, who has himself resigned from Congress.

“Trying to do my job in Washington and run for office, another office, in Hawaii was just too difficult. I couldn’t do it,” he recalled. “I had hoped maybe I could do it, and it became obvious that I couldn’t. So I resigned my seat.”