TEHRAN, Dec 24_A cargo vessel overturned while being loaded in San Cristobal, Ecuador on Sunday (December 22), polluting the pristine waters of the Galapagos National Park with 600 gallons of diesel. 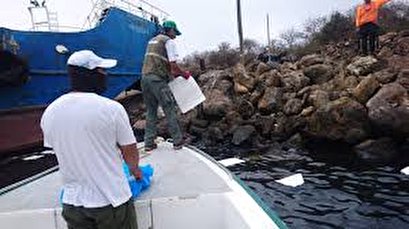 TEHRAN, Young Journalists Club(YJC)_Galapagos Park Officials and the Ecuadorian Army are working to limit the damage caused with containment barriers and absorbent wool around the sunk vessel.

"We have moved all the necessary resources to contain the problem in San Cristobal. Also, an investigation was started to sanction those responsible", Ecuadorian Environmental Minister, Raul Ledesma Huerta, posted on his Twitter account.