TEHRAN, Dec 27_The Popular Mobilization Units (PMU), better known by their Arabic name Hashd al-Sha’abi, says it has fought off an attack by the Daesh terrorist group against an area south of the Iraqi city of Samarra. 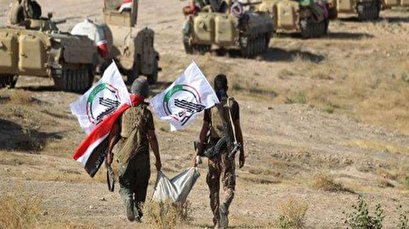 TEHRAN, Young Journalists Club(YJC)-In a statement on Friday, the Hashd al-Sha’abi said the Daesh elements were trying to infiltrate through Tal al-Zahab region, south of Samarra, and block a strategic road to the city of al-Balad and the Shrine of Syed Muhammad bin Imam Hadi.

However, it added, the terrorists were detected with the use of thermal cameras, and the Hashd al-Sha’abi forces repelled their offensive.

Earlier this month, the Hashd al-Sha’abi deployed massive forces in Diyala province near Iran's border to counter Daesh terrorists in joint operations with the Iraqi army.

The move came after Daesh terrorists attacked an important oil-rich area east of the province on the Iraqi-Iranian border.

Several members of the popular forces were killed and wounded in the terrorist attack on the city of Diyala.