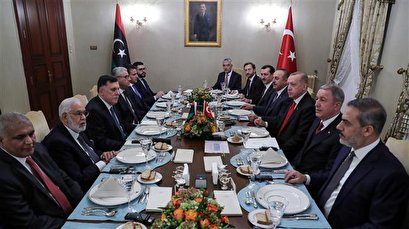 "Libya's government has requested Turkey's military support. As President Erdogan said, we will of course honor our agreement. We are fully committed to protecting our mutual interests and establishing stability in the Mediterranean."

The Turkish official further noted that the maritime deal reached between Turkey and Libya last month "ensures that Turkey’s freedom of movement in the high seas is not undermined."

"It also ensures a strong relationship with the Libyan government. We are committed to stability and peace both in Libya and in the Mediterranean," he added.

On November 27, Turkey and Libya signed the maritime accord which marks the boundary between the two countries in the energy-rich eastern Mediterranean close to the Greek island of Crete.

They also inked another agreement on expanding security and military cooperation. The accord granted Ankara the right to deploy troops to Libya if asked by Tripoli.

Speaking on Thursday, Erdogan said the Turkish parliament would vote on January 8 or 9 on a motion to send troops to Libya in a bid to bolster the Tripoli-based government against forces loyal to renegade Libyan general Khalifa Haftar.