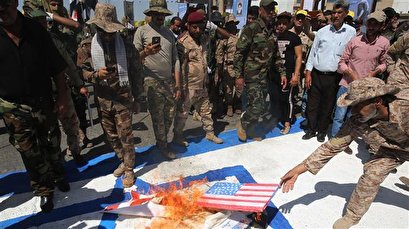 TEHRAN, Young Journalists Club(YJC)-The Iraqi News Agency (INA) reported on Friday that Salih decried the attacks as being unacceptable and damaging for the country, adding that the strikes were contrary to security agreements inked between Baghdad and Washington.

Major General Abdul Karim Khalaf, spokesman for the Commander-in-Chief of the Iraqi Armed Forces, also said that Adel Abdul-Mahdi, currently Iraq's caretaker prime minister, has voiced his opposition to the attacks in a message to US Defense Secretary Mark Esper.

"Bombing PMU bases is a dangerous aggravation which endangers the security of Iraq and the region," Iraqi media sources cited Abdul-Mahdi as saying.

The premier also reportedly ordered Iraq's Joint Operations Command (JOC) to not allow any air or land-based operations to take place in the country without the government's approval.

Earlier on Friday, US forces conducted drone strikes on a number of Kata'ib Hezbollah bases in Iraq's western Anbar province, killing at least 25 individuals and leaving another 51 injured, according to the PMU.