TEHRAN, Dec 31_A new lawsuit is accusing the US Department of Justice and the Federal Bureau of Investigation of violating free speech and privacy rights. 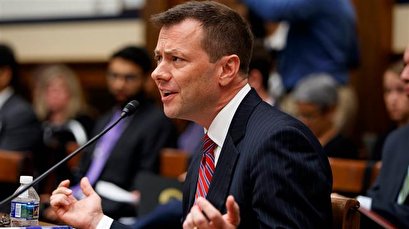 TEHRAN, Young Journalists Club(YJC)-Filed by former FBI agent Peter Strzok and his team on Monday, the court document also alleged that “there is no evidence of an attempt to punish” Trump supporters by the Justice Department, suggesting the DOJ only targets anti-Trump figures, including the onetime member of former special counsel Robert Mueller's Russia probe, who had privately spoken against the Republican president.

“The government’s argument would leave thousands of career federal government employees without protections from discipline over the content of their political speech,” the filing said.

Strzok had called Trump an “idiot,” openly hoping for his failure to become president in texts he exchanged with former FBI lawyer Lisa Page, which were later released by the DOJ.

“Nearly every aspect of a modern workplace, and for that matter nearly every non-workplace aspect of employees’ lives, can be monitored,” the lawsuit added. “The fact that a workplace conversation can be discovered does not render it unprotected.”