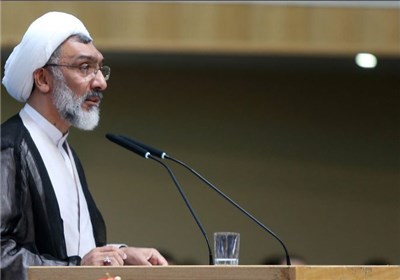 Iran’s Minister of Justice speaking in the 1st Congregation of Religious Leaders against Violence to Children said "The thing that we have to pay attention to is a pivotal point for legal and emotional support for children. This is something that has been widely mentioned throughout the world and which has proved how important it is.”

He further pointed out "The statistics on the number of orphans in Iraq, Syria, and Afghanistan are the biggest present-day catastrophe; something that has been brought about by human rights pretenders.”

"The pretenders are those who wage wars and commit terror and genocide. On one hand they beat the drum for children’s rights while on the other they violate their rights. There is child trafficking done by developed countries these days as well as violation to their rights by human rights pretenders,” the Minister of Justice asserted.

He further added "Today there are advanced research done on human beings as well as weakened nuclear weapons tested on children in developing countries which I have to say are so worrisome.”

Stating that the Islamic Republic provides remedies for all human ills, Pourmohammadi said "The incumbent administration pays special attention to the citizenship, children, and women’s affairs.”