Tehran 11 January_US House of Representatives Speaker Nancy Pelosi (D-Calif.) has said that she is planning to send the articles of impeachment against President Donald Trump over to the Senate next week. 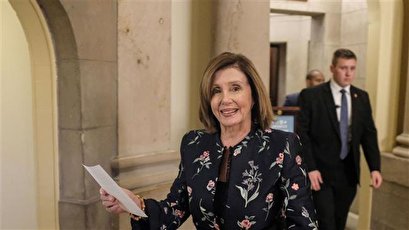 TEHRAN, Young Journalists Club(YJC)-I have asked Judiciary Committee Chairman Jerry Nadler [D-N.Y.] to be prepared to bring to the Floor next week a resolution to appoint managers and transmit articles of impeachment to the Senate," Pelosi wrote in a letter to Democrats on Friday.

"I will be consulting with you at our Tuesday House Democratic Caucus meeting on how we proceed further," she added.

The Senate impeachment trial of Trump could begin as early as Wednesday, according to Pelosi.

Last week, Trump claimed he “did not really care” about the trial in the Senate following his impeachment by the House, but he would be happy to have a trial.

“I don’t really care. It doesn’t matter. As far as I’m concerned I’d be very happy with a trial because we did nothing wrong,” Trump told reporters on December 31.

The Republican president reiterated that he considered his impeachment by the Democratic-led House a hoax.

Trump and his Republican allies have attacked the impeachment effort as illegitimate.