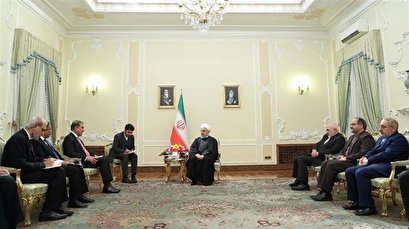 TEHRAN, Young Journalists Club(YJC)-"Relations with Pakistan are very important for Iran and we recognize much significance for an expansion of ties between the two countries," Rouhani said on Sunday.

The Iranian president added that Tehran welcomed Pakistan's efforts in seeking to ensure peace and stability in the region. He also called for improved dialogue and cooperation between the region's Muslim states.

Rouhani added that Tehran and Islamabad should deepen their relations and not allow certain terrorists groups threaten the security of the two countries' shared borders.

"The leaders of the United States and the Israel, along with leaders of terrorist groups around the world such as Daesh, were happy with the assassination of Soleimani," Rouhani said.

"However, people who seek peace and security in the region were saddened [by the incident]', he added, calling on "all countries to firmly condemn Washington's act of government terrorism".

Rouhani stressed that in the "current circumstances" all sides need to "cooperate in deescalating tensions in the region".

Speaking on his part, Qureshi vowed that Islamabad will not allow his country's borders to be used to threaten Iran and that Pakistan regards itself as "a partner in the peace and stability" of Tehran.

"We believe that that the borders between the two countries are borders of peace and friendship," he said, adding that Islamabad was determined to deal with those seeking to create insecurity in the border area.

Iran has been the victim of a number of terrorist attacks in its southeastern province of Sistan and Baluchestan originating from Pakistan, which lies east of the province.