Tehran 16 January_Spain's Prime Minister Pedro Sanchez on Tuesday announced he will meet with Catalonia's President Quim Torra to address the Catalan crisis, despite a court ruling that barred the regional leader from holding public office for 18 months. 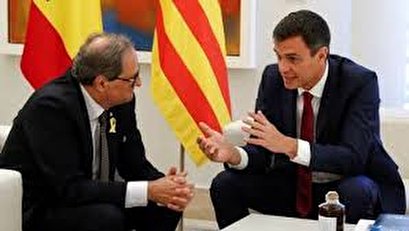 TEHRAN, Young Journalists Club(YJC)-Quim Torra was removed from office by Spain's central electoral commission on January 3 and was stripped of his status as regional MP following his refusal to withdraw signs calling for the release of jailed political leaders from public buildings during the 2019 election campaigns.

Spain's Constitutional Court has recently upheld the electoral body's withdrawal of Torra's credentials as a lawmaker while deliberating on his status as regional president.

Mainstream Spanish media described the stark contrast between the Spanish executive and judiciary vis-à-vis Catalan politicians as a reflection of the separation of powers in a functioning democracy, while separatists in Catalonia have denounced what they call the stranglehold of the conservatives over the judiciary and an attempt to torpedo talks between central and regional governments.

Spain's legal battles against Catalan separatist politicians moved to the European Parliament in Strasbourg Monday, when two self-exiled Catalan officials were allowed to take their seats as MEPs after they won in the 2019 EU election.

However, their jailed colleague, Oriol Junqueras, was stripped of his MEP status following Spain's Constitutional court's refusal to grant him immunity as requested by the European Court of Justice.

While many welcome the prospect of the newly-found détente between Madrid and Barcelona, skeptics bet the talks will be short-lived due to a divided pro-independence movement, a fragile coalition government, and a politicized justice.