Tehran 17 January_An Iraqi legislator has denounced President Donald Trump’s threats to impose sanctions on his country and demand billions of dollars in compensation if it expels US troops, stating that such policies are equal to “piracy.” 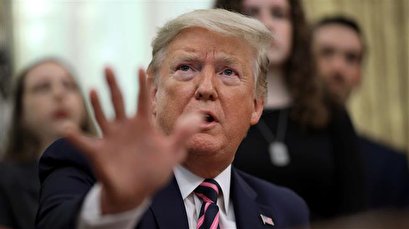 TEHRAN, Young Journalists Club(YJC)-“Trump's threats to impose sanctions on Iraq are a type of piracy from a mafia, which has plagued f political decision-making bodies in the United States and has drawn the ire of the American nation,” Kazem al-Sayadi said in an exclusive interview with Arabic-language al-Sumaria television network on Friday.

He also dismissed Washington's threat to restrict access to around $35 billion of the Iraqi oil revenues that are held at the US Federal Reserve, emphasizing that Trump has absolutely no right to take such a measure and block access to a US-based account where Baghdad keeps oil revenues that feed 90 percent of the national budget.

“The US threats of imposing unilateral sanctions on Iraq came after we rejected Washington’s policies of targeted killing and arrogance, and censured the violation of our airspace. Iraq, today, is not what it used to be in the past. We have several allies, namely China, Russia and a number of European countries, with which we can clinch long-term agreements,” Sayadi pointed out.