Tehran 20 January_Turkish military forces have reportedly accommodated more than a thousand members of families of allied Takfiri militants in residential buildings in Syria’s northeastern province of al-Hasakah in the aftermath of a cross-border incursion against militants of the Kurdish People's Protection Units (YPG). 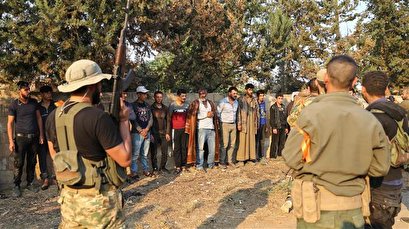 The development took place after Turkish-backed militants fired a barrage of artillery rounds and rocket shells at civilian buildings in Umm al-Keif village, also known as Timar, in the western flank of Hasakah province back on January 12 in an apparent effort to drive out the civilian population in order to pave the way for militants' families to move in.

SANA reported at the time that the projectiles had caused material damage to houses and private property in the target area, but did not say whether there were any casualties as a result.

The report added that Syrian government forces identified the origin of the attack, and destroyed the terrorists’ launching pads in response.

On October 9 last year, Turkish military forces and Ankara-backed militants launched a long-threatened cross-border invasion of northeastern Syria in a declared attempt to push YPG militants away from border areas.