Tehran 20 January_US President Donald Trump has called on the Republican-led Senate to reject an impeachment launched against him by the Democrat-led House of Representatives over his alleged beach of Congress' trust and abuse of power. 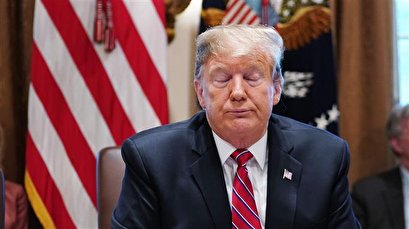 Trump, a Republican, has so far remained defiant, claiming there were no legal grounds for his impeachment.

He has described the impeachment as a "witch-hunt", giving reassurance to his power base that the Republican-controlled Senate is highly unlikely to remove him from office

"The Senate should speedily reject these deficient articles of impeachment and acquit the president," an executive summary of Trump's pre-trial brief said in the Republican president's first comprehensive defense on Monday before his Senate trial begins.

Trump's defense described the obstruction of Congress charge against him as "frivolous and dangerous," saying the president exercised his legal rights by resisting congressional demands for information, also known as subpoenas.

"House Democrats propose removing the President from office because he asserted legal rights and privileges of the Executive Branch against defective subpoenas - based on advice from the Department of Justice," it said.

The defense argued that, "Accepting that theory would do lasting damage to the separation of powers" between the executive, legislative and judicial branches of government.