Our enemies only understand language of force: IRGC commander

Tehran 21 January_The Islamic Republic must stand fast in the face of its enemies as they only understand the language of force, says the new commander of the Quds Force of Iran’s Islamic Revolution Guards Corps (IRGC). 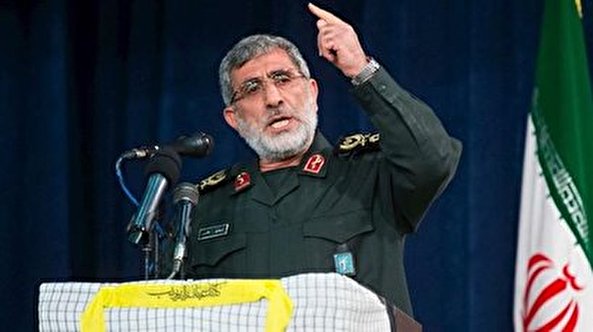 TEHRAN, Young Journalists Club(YJC)-“Our enemies only understand the language of force and this is why we must maintain our ground against them,” Brigadier General Esmaeil Qa’ani said while speaking in his induction ceremony in Tehran on Monday.

Describing the United States as the source of enmity, wickedness and mischief against Iran, the commander said, “If we fulfill our duty in an appropriate manner, all threats can be turned into opportunities.”

Qa’ani was appointed by Leader of the Islamic Revolution Ayatollah Seyyed Ali Khamenei following the assassination by US terrorists of Lieutenant General Qassem Soleimani and his companions in a vicious, cowardly airstrike outside the Baghdad International Airport.

In the statement, the Leader described Qa’ani as one of the IRGC's most prominent commanders during Saddam Hussein's imposed war on Iran, which lasted eight years starting in 1980.

Qa’ani was serving as the Quds Force's deputy commander prior to the new appointment on Friday.

Stressing that the enemies martyred Soleimani in an unfair manner, Qa’ani said, “They were not man enough to face Haj Qassem on the battlefield. They martyred our high-ranking commander in the most cowardly manner, but with the grace of God and the perseverance of all valiant men across the world, we will strike back at his enemy in a manly way.”

Noting that the sole way to overcome enemies is through steadfastness and resistance, the new head of the IRGC’s Quds Force said, "The bright path, which Haj Qassem tread with strength and power, will continue with full force as the Commander-in-Chief of the Armed Forces stipulated in his edict."