Tehran 21 January_Yemen’s ruling Houthi Ansarullah movement has rejected a claim by Saudi Arabia and the United Arab Emirates (UAE) that it was behind a deadly missile attack against the positions of pro-Riyadh militants in the northern city of Ma’rib. 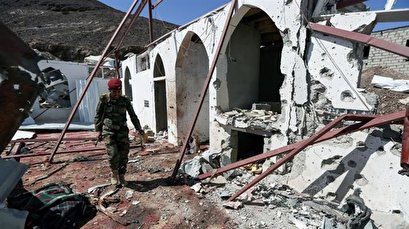 Some reports suggested that forces from Saudi Arabia, the United Arab Emirates and other countries were present at the site when the attack occurred.

The death toll increased to 116 from an early count of 83 and is expected to rise further, military and medical sources told AFP on Monday. As many as 150 others were reported to have sustained injuries.

The Saudi regime and the UAE — two key parties to a Riyadh-led coalition waging war on Yemen — blamed the raid on the Houthi movement, which has been defending the country against the massive military invasion.

However, Mohammad al-Bakhiti, a member of Yemen’s Supreme Political Council, denied any role in the missile strike in an interview with the Al Jazeera television network late on Monday.

“If we [Houthi fighters] had carried out the attack, we would have announced it publicly,” said the official.

Tens of thousands of people — most of them civilians — have been killed in the Saudi-led airstrikes and ground operations in Yemen over the past five years.