Tehran 21 January_Around 108,000 flood-stricken people have been provided with relief during outreach operations in Iran’s southeastern Sistan and Baluchestan Province, where unprecedented torrential downpours have left a trail of destruction. 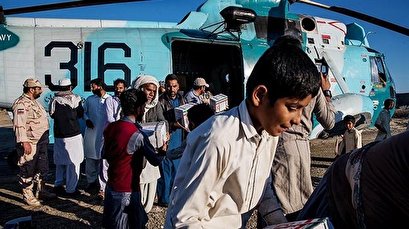 Two days earlier, the province had begun experiencing precipitation that exceeded the level of last year’s downfall by 26 times.

The official said as many as 1,017 villages had been damaged in 15 counties across the province, adding that more than 4,000 relief workers had successfully given assistance to the people there. Two relief helicopters, meanwhile, carried out 150 sorties to afflicted areas and rough terrains, most of which were destined to the province’s Chabahar County, he noted.

Rashki also said that 12,450 affected people had been housed in makeshift shelters during the same period.

President Hassan Rouhani paid a one-day visit to the province on Saturday to monitor the ongoing relief operations, attending a session of the Coordination Council of the province’s Crisis Management Headquarters. The president was accompanied by several ministers during the stay.