Tehran 22 January_Three Palestinians have been shot and killed by the Israeli army after crossing into the occupied territories. 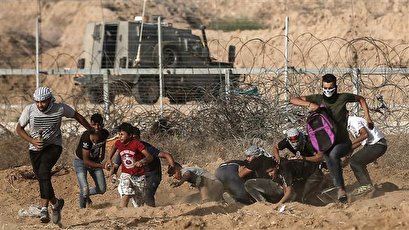 TEHRAN, Young Journalists Club(YJC)-The army said on Tuesday that the Palestinians were killed after they had crossed the separation fence in the Gaza Strip and launched an explosive device at IDF soldiers.

No further detail was immediately available about the victims.

The Israeli army regularly guns down Palestinians in Gaza, accusing them of attempting to enter the occupied territories or carrying out attacks on its forces.

The Gaza clashes reached their peak on May 14, 2018, on the eve of the 70th anniversary of Nakba Day (Day of Catastrophe), which coincided with the US embassy relocation from Tel Aviv to occupied East Jerusalem al-Quds.