Tehran 22 January_Israel’s Prime Minister Benjamin Netanyahu has doubled down on his pledge to annex the Jordan Valley and all the settlements in the West Bank as the Israeli elections draw near. 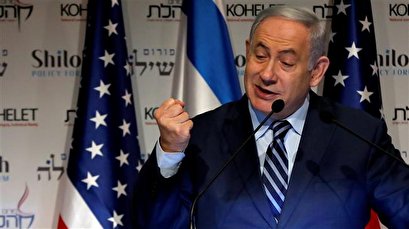 Ahmad Tibi is an Arab member of the Knesset criticized by Israeli politicians for his anti-Zionist positions as well as his close relations with Palestinian parties.

“Not only will we not uproot anyone, we will apply Israeli law to all Israeli settlements without exception,” Netanyahu added.

The remarks came hours after Netanyahu’s main rival, Blue and White party leader Benny Gantz, said he would work to advance the annexation of the Jordan Valley “in coordination with the international community” if he wins the March 2 general elections.

Netanyahu urged Gantz not to wait until after the elections, but rather support the measure if it is brought before the Israeli parliament (Knesset) for a vote.

“Why wait until after the elections if it is possible to apply sovereignty over the Jordan Valley already with broad agreement in the Knesset? Benny Gantz, I expect your answer this evening, unless Ahmad Tibi vetoed you,” the Israeli premier said.

Gantz retorted by tweeting, “First we’ll discuss immunity and then we’ll manage applying sovereignty,” referring to Netanyahu’s request from the Knesset to be exempt from prosecution in the three corruption cases he is charged with.

In September 2019, right before the last elections, Netanyahu vowed that if re-elected, he planned to annex additional “vital” parts of the West Bank beyond the Jordan Valley and the major settlement blocs, and do so in coordination with the United States.