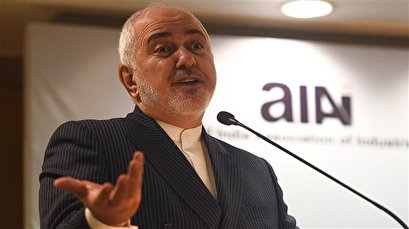 TEHRAN, Young Journalists Club(YJC)-In a post on his Twitter account on Wednesday, Zarif attached a screen shot of a Washington Post report, which covered Trump’s most recent threat to put hefty tariffs on European cars at the World Economic Forum in Davos on Tuesday if trade negotiations did not go his way.

Zarif said he had already warned the Europeans of such US measures in an earlier tweet.

Trump’s new threat came days after the three European signatories to nuclear accord — France, Britain and Germany — gave into Washington’s pressure and triggered a dispute mechanism devised in the 2015 deal, called the Joint Comprehensive Plan of Action (JCPOA), which amounts to a formal accusation that Tehran had broken the terms of the accord.

Shortly after the mechanism was activated, a Washington Post report revealed that Trump had threatened to impose a 25 percent tariff on European automobile imports if the trio — known as EU3 or E3 — refused to formally accuse Iran of violating the JCPOA.